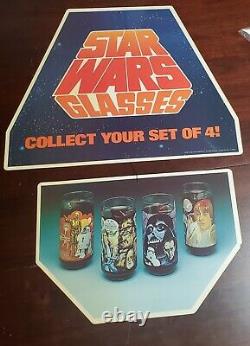 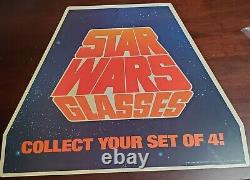 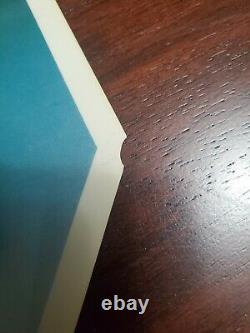 I think this 2-piece was only used in test markets. That differs from the 3-piece mobile Burger King issued, which is dated 1978. The 1978 3-piece mobile, as nice as it is, was issued in greater quantity.

That's because the BK glasses campaign didn't break widespread throughout America until the 1978 calendar year. This 2-piece 1977 piece has only been spotted a couple of times over the past several decades, and, that was only within the pool of the most elite and advanced of the hardcore Star Wars foodie display collectors. Not only is this mobile rare, it's fundamentally one of the best Star Wars product advertising pieces ever created.

This boldly designed 2-piece mobile measures 24 inches tall (not including the string at the top) by 17 inches wide. It's made of stiff plastic and has printing on both sides. It has great spinning action, and, it's in FANTASTIC ORIGINAL CONDITION! It's just as it was taken down in 1977.

It's not perfect mint, but it's very solid and extremely nice! The string at the top will not reach the ceiling, but it's still two or three inches long, and so it would be very easy to tie another string to it. There is a small chip in the white plastic in the far right white margin near the Luke Skywalker glass. It's only in the white edge, and, there are only general signs of slight discoloration or "age" throughout this piece, otherwise it's like new.